Spock.com is full of misogynists

Disclaimer: The following is the personal opinion of my own written on my personal blog, not a reflection of the collective opinion of Women 2.0

Kathy Sierra was silenced by death threats to her blog on "Creating Passionate Users". Then Don Imus was fired for comments about "nappy-headed hos".

I was working at the Web 2.0 Expo in San Francisco yesterday and heard from MANY women who visited the Women 2.0 booth that Spock.com had offended them personally, I asked a Spock.com guy about it. He then reminded me that Spock.com was giving Women 2.0 a sponsorship for our upcoming event and gave me a look as he left that basically said "shove it".

A member of the Systers community (a mailing list founded by the Anita Borg Institute for women and technology) recounted what had happened.
If there's not already a voice in my head that screams "misogyny", check this comment on a post about Spock.com at Tim O'Reilly's blog.
That comment either escaped moderation from ignorance or misogyny. Either way, it should be addressed. Someone else suggested writing to Spock.com and its investors, Clearstone Venture Partners and Opus Capital. That's a fine idea. I've spent the last 2.5 years of my working life at startups without HR and I think engineering/male-dominated startups kinda need it. They also need more diversity on their teams, starting with hiring more women.

Little zings to women whether online or on the radio or in person should always be called out, brought to light, and extinguished. What is that smell in the air?

Spock.com's brilliant idea to publicly perform a search for scantily-clad Victoria's Secret models was projected onto multiple big screens at a large conference hall is a social faux paus because it offended many women in the audience --- I don't care if Spock.com has an amazing product, to read rave product reviews on their service, for the email the Spock.com CEO sent me as an apology. I still feel dirty that this happened in front of hundreds of attendees in broad daylight, and that women who speak out against bad taste are being called feminists and considered to be in hysterics. Wait a second. I don't think I'm the one exercising bad taste and testosterone-laden immaturity here.

Next time you do a search for lingerie or swimsuit models during a demo, you better run a search for beefcakes next. Seriously. 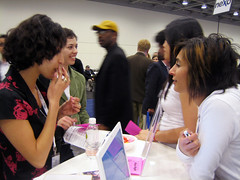 I call this "the minority picture" -- four women and one black guy at Web 2.0 Expo?! Amazing. 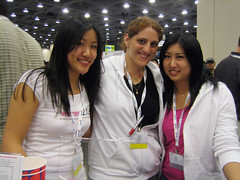 Annie, Shivani, and I womanning the Women 2.0 booth 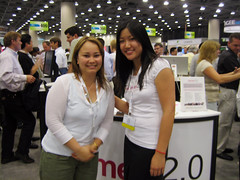 Rachel Cook, founder of Minti.com with Annie. Rachel is an inspiration.